Giovanni Lorenzo Bernini was born in 1598 in Naples, Italy and he is one of the greatest artists of the Italian Baroque period. He was famous both for his sculptures and his architecture. His father Pierto was well known sculptor too. When he was about 7 years old, his father took him to Rome. There he saw the works of many famous artists. By the time he was 20, Bernini was a sculptor, carving statues out of marble. He had learnt a lot, not just how to carve marble, which he learnt from his father, but how to make figures that told stories like Carracci’s and Michelangelo’s and seemed to be alive, like Caravaggio’s. One of the most well-known sculptures of Bernini is Appolo and Daphne.

Apollo and Daphne is a life-sized Baroque marble sculpture executed between 1622 and 1625. Housed in the Galleria Borghese in Rome, the work depicts the climax of the story of Apollo and Daphne  in Ovid’s Metamorphoses.

1. The wedding will commence at eight o’clock.
2. When Abe lost his job, he had to migrate to a place where he could find work.
3. We could tell Ira was happy by the bright gleam in his eyes.
4. Because of the famine, people were dying in the streets.
5. Many people claim to have seen a ghostly vessel sailing through the fog.
6. Can you identify the flags of all the states in the United States?
7. He was observant of all the rules of his religion.
8. The editor sent five reporters to cover the big story.
9. They were trying to revive interest in old movies.
10. The travelers were stupid to persist in eating the food after they were told it was spoiled.
11. Hazy weather kept the pilot from seeing the airfield clearly.
12. The young journalist applied for his first job at a small newspaper. Answer

The  Story  of an Hour

1.Why  should the news be told as gently as possible?
2. Who informed her about  the news?
3.How  did she accept  the news? Describe  her  feelings.
4.What  was the weather  like?
5.Can you describe her appearance?
6.What  happened in the  end?
7.State  your  own point of view. Every student’s perspective is different and so is their view of this story’s field.

1. The massive* tree on the corner was a menace to traffic.
2. At parties, the shy girl would dread being asked to dance.
3. My uncle has a tendency to repeat the same story over and over again.
4. The modest man used to underestimate his own strength.
5. No person can ever excel in all things he does.
6. Being flexible is far better than being stubborn.
7. We went to the beach on numerous occasions last summer.
8. Playing with dolls is traditionally* a feminine pastime.
9. Only the brightest students were invited to compete for the prize.
10. Carole was ten years old before her parents finally let her mount a horse.
11. The amateur* tennis player completed many matches without being victorious․
12. When Stuart started growing a mustache, it was obvious* he was becoming more mount.

1. Most people agreed that he was a weird looking man because of the long red beard.
2. Chuck’s reason for quitting his job was valid; he was not being paid.
3. The answer to the question was so obvious that everyone knew it.
4. The mediocre tennis player would never make the Olympic squad.
5. She was reluctant to take on any more responsibilities at work.
6. People often tend to exaggerate stories they hear.
7. The bank is kept under very tight security․
8. Because the box was so bulky it took two men to lift it.
9. Even though he was not a professional, the amateur photographer entered the contest.
10. A wide variety of shows is playing at the concert hall.
11. Mrs. Meyers is a prominent member of the staff.
12. We all hoped that the small boat would survive the storm.

1. reluctant- unwilling
2. mediocre- average, ordinary
3. prominent- well-known, important
4. obvious- easily seen or understood
5. exaggerate- overstate, make something greater than it is
6. bulky- large, taking up much space
7. variety- a number of different things
8. valid- true, supported by facts
9 . security- feeling or condition of being safe
10. survive- remain alive, live on
11. weird- mysterious, unearthly
12. amateur- person who does something for pleasure, not as a profession 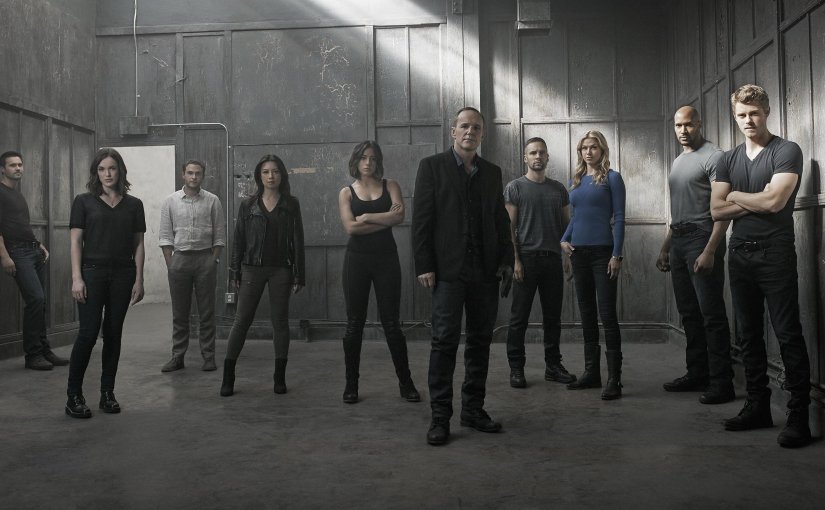 Agents of S.H.I.E.L.D. is an American television series created for ABC by Joss Whedon, Jed Whedon, and Maurissa Tancharoen, based on the Marvel Comics organization S.H.I.E.L.D. (Strategic Homeland Intervention, Enforcement, and Logistics Division), a fictional peacekeeping and spy agency in a world of superheroes. The series revolves around the character of Phil Coulson, with Clark Gregg reprising his role from the film series, and his team of S.H.I.E.L.D. agents, who must deal with various unusual cases and enemies, including Hydra, the Inhumans, Life Model Decoys, and alien species such as the Kree. The series was officially picked up by ABC in May 2013. The first season originally aired from September 24, 2013, to May 13, 2014, while the second season aired from September 23, 2014, to May 12, 2015. A third season premiered on September 29, 2015, concluding on May 17, 2016, and the fourth season premiered on September 20, 2016, and concluded on May 16, 2017. A fifth season of Agents of S.H.I.E.L.D. premiered on December 1, 2017 and concluded on May 18, 2018. In May 2018, the series was renewed for a sixth season, intended to premiere in May 2019. In November 2018, ahead of the sixth season’s release, the series was renewed for a seventh season.

Phil Coulson
A S.H.I.E.L.D. agent who oversees many of the division’s field operations. In April 2013, Gregg agreed to join the series after hearing Whedon’s explanation for Coulson’s resurrection, following the character’s death in The Avengers, which he called “fascinating” and “true to the world of the comics and mythology”. On whether the resurrected Coulson would be the same as before he died, Gregg said the character had to have changed in some way, but he may not understand how much he has changed. Gregg said he approached Coulson’s promotion to Director of S.H.I.E.L.D. as being his dream job, which at the same time forced the character to adopt a more level-headed attitude, like that of Nick Fury. Assuming the mantle of Ghost Rider temporarily in the season 4 finale burns through the Kree blood that healed him and leaves him slowly dying throughout season 5. In addition to a Coulson hologram in season 6, Gregg will be playing an unknown character. 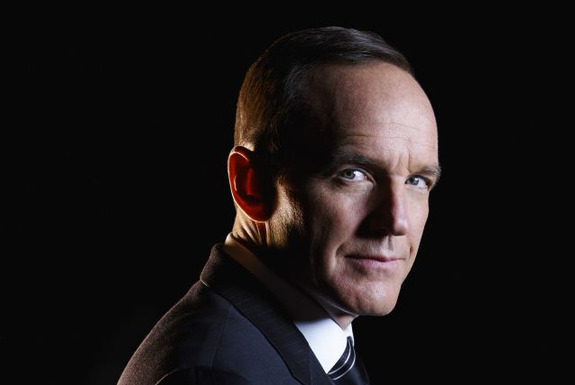 Melinda May
A S.H.I.E.L.D. ace pilot and weapons expert, nicknamed “the Cavalry”. Joss Whedon had the character, who was originally listed with the name Agent Althea Rice on casting sheets, “rolling around in his head” for a long time. Wen was given some backstory for the character to prepare, but was not told how she gained her reputation; with May’s past revealed in “Melinda”, Wen called it “devastating.

Grant Ward
Ward is a Hydra agent who poses as a S.H.I.E.L.D. black ops specialist. From the conception of the series it was decided that he would be a traitor, with Jed Whedon explaining that they wanted to have “infiltration based on betrayal” on a small scale to represent the same thing happening on a massive scale, and to make the Hydra reveal more personal for the characters. Following the death of his Hydra superior, John Garrett, Dalton explained that he felt that Ward was always loyal to Garrett rather than Hydra, and so without Garrett would become more of a wildcard, eventually accepting his position as an antagonist to S.H.I.E.L.D. He is killed by Coulson in season three and his body is possessed by the ancient Inhuman, Hive.

Daisy “Skye” Johnson / Quake
An Inhuman hacktivist and S.H.I.E.L.D. recruit who eventually becomes an agent with the ability to sense vibrations and create earthquakes. The character of Skye was always intended to be the MCU version of Johnson, with Tancharoen noting that the reveal would have consequences for the character’s relationships, especially with Coulson. Bennet felt that the character was someone who would wear her heart on her sleeve, but she also has some control over her emotions. During the third season, the character no longer goes by “Skye”, and by the end is known as “Quake” to the public.

Leo Fitz and Jemma Simmons
Leo Fits is an agent of S.H.I.E.L.D. who specializes in engineering, especially weapons technology. The character receives brain injuries at the end of the first season, with the writers researching brain trauma with doctors and experts before approaching it in the series. De Caestecker did his own research as well, feeling it is “something that should never be trivialized. It’s a real and serious thing to a lot of people, brain trauma, so we just have to constantly be respectful towards it.” Jemma Anne Simmons is an English-born former S.H.I.E.L.D. agent and scientist. A genius biochemist, she is one of the youngest and most prominent members of S.H.I.E.L.D.’s research division, along with her partner and husband, Leo Fitz. She, along with Fitz were recruited to Coulson’s Team and worked with them on all of their missions. 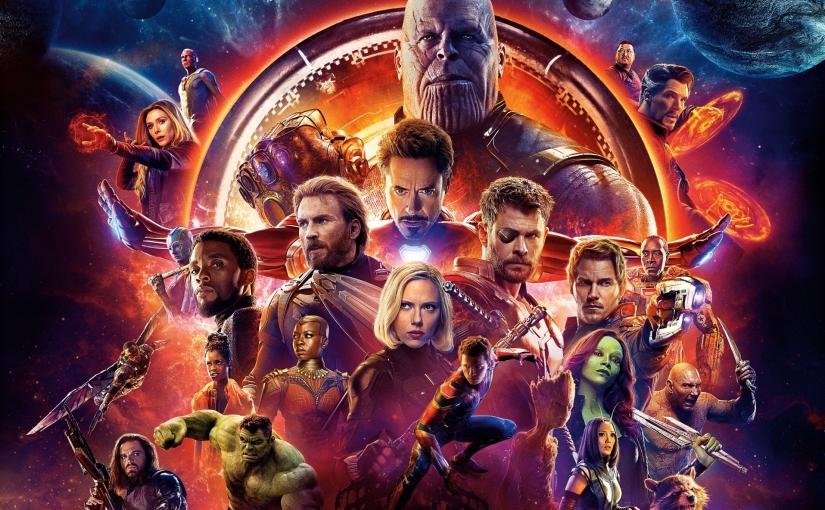 This film is a 2018 American superhero film based on the Marvel Comics. produced by Marvel Studios and distributed by Walt Disney Studios Motion Pictures. The film is directed by Anthony and Joe Russo, written by Christopher Markus and Stephen McFeely.  It released in April 23, 2018. Additional filming took place in Scotland, England, the Downtown Atlanta area, and New York City. Film’s budget is 316–400 million dollars. The film received praise for the performances of the cast and the emotional weight of the story, as well as the visual effects and action sequences. It was the fourth film and the first superhero film to gross over $2 billion worldwide, breaking numerous box office records and becoming the highest-grossing film of 2018, as well as the fourth-highest-grossing film of all time and in the United States and Canada.

Fill in the blanks
1. We have tried for over 200 years to preserve the United States Constitution.
2. The gloomy weather predictions* upset him.
3. Will Karen consent to having her baby picture published in the school newspaper?
4. I found a unique collection of old books in the attic.
5. Dave knew that if he mistreated her, she would resent it.
6. The president denounce the criminal activities that were going on.
7. Lori feared that if she walked the streets, she would be molest․
8. Owning a house created unforeseen difficulties.
9. The new movie invited a torrent of disapproval.
10. A telephone call told us that the employees’* picnic was postpone until next week.
11. The capsule was filled with records of the past.
12. It was a massive job for just one person to unload the big truck.

Once upon a time there was a huge kingdom. Everything was good there, almost all the people were friendly and happy, there were no poor people. Yes, you can say that everything was perfect there, but there was still a villain in the kingdom, who always harmed people and was making  their lives worse. Once, a dismal witch spoiled the whole crop, ruined almost all the fertile trees with poisonous vapor. This meant that in winter there would be no fruits and vegetables. After this terrible act, some citizens decided to kill a witch but a majority of people decided to just punish her by making  understand her mistake. They operated a special theory for witch’s punishment. They considered the punishment  to be so essential that it would help the witch to become a little better and kinder. After thinking, the citizens of this kingdom decided that the witch should work in the garden, help people and understand that the earth is life and you must respect and protect it.

Նիկա Պողոսյան
Create a free website or blog at WordPress.com.